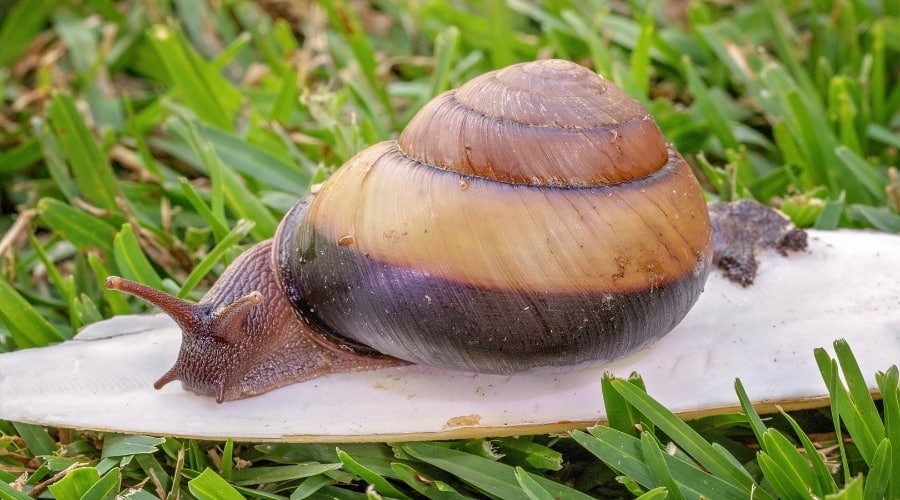 Snails are herbivores, so they eat anything from leaves and fruit to mushrooms. If a snail can’t find a living plant, it will also eat ones that have decayed. After all the food they eat, do snails poop?

Snails do poop, and sometimes a lot. The anus of the snails is inside their shell, opening up into a cavity right beside their mantle. Snails poop inside their shell and slowly release it closer to their face, making it look like they are pooping from their head.

Additionally, snails require a lot of calcium, so they are known to eat chalk from rocks. Even though there are some omnivore snails, the population is so low it’s unlikely you will ever see snails feeding on anything other than plants.

A snail’s poop looks like dirt or dust since it is so tiny. You can identify snail poop in several different ways.

If you are looking at snail poop, it’s ordinarily wet when it’s fresh but quickly becomes dry and pale. The color of snail poop depends on the diet as well as the snail’s shell.

So, a snail with a red shell will have red poop. Another example is if a snail eats a pumpkin, it will look orange. Additionally, a garden snail typically poops green.

How Do Snails Poop

Some people think snails’ poop from their heads or mouths, which isn’t true. Even though a snail does have a unique way of pooping.

How Often Does A Snail Poop

Snails poop quite often. Since the mollusk has no bowel control, they will defecate whenever and wherever they feel the urge.

Since snails are herbivores, a lot of the poop will be typically found on leaves and other plants in the garden.

Additionally, if you have an aquarium, you could likely clean the tank and see a lot of snail poop only a short time later.

Where Do Snails Poop

There isn’t a specific location where snails’ poop. It all depends on where they last ate. If you have snails as pets and notice a lot of poop, it’s most likely because the snail has been eating a lot.

Additionally, a snail may even poop when they are mating.

Do Snails Poop When Scared

There is no evidence a snail poops when it’s scared. After all, a snail has little to no control over when and where it poops.

It’s just a biproduct of eating. When a snail gets scared, it will retreat into its shell. This mostly happens when you touch it out of the blue.

If the snail is a pet, it’s best to let them get comfortable in their surroundings before handling them a lot.

Do Snails Eat Their Own Poop

Even though Snails will eat leftover fish food if they are in the water or even decaying plant matter, snails do not eat any kind of fecal matter.

You probably see so much snail poop because they are eating more than usual. A snail is picky about their diet because they need a lot of calcium for their shell, so it doesn’t break.

Some aquarium snails also eat bloodworms and brine shrimp. Snails need a balanced diet to stay healthy. Even though some species like butterflies can get nutrients from feces, a snail is not one of them.

A snail’s poop is not toxic. As with any other type of poop, it’s best to wear gloves when handling it.

However, snails are herbivores, so it’s unlikely there will be something hazardous in their poop. In fact, there has never been a recorded case when snail poop has caused an issue with a person.

Is Snail Poop Good For Plants

There are mixed feelings about snail poop being good fertilizer. However, there are several reasons why it is not an ideal choice.

Since snails are readily preyed on, they contain many different types of parasites which can be spread to your plants. It’s certainly not something you want in your garden, especially if it is an herb or vegetable garden.

How To Clean Snail Poop

Many people keep snails as pets, or they are part of a giant terrarium and other species. Either way, after a while, you may notice a large amount of snail poop in your tank.

Undoubtedly, it will seem like a constant job since snails poop a lot, but there are several ways to effectively clean the snail poop.

If you’re tired of seeing snail poop everywhere and the mollusks have been destroying your garden, there are several things you can do to keep snails away from your garden.

Snails are one of the few animals who look like they are pooping out of their mouth. Additionally, these garden pests can leave quite the trail.

If you go out and see little c-shaped droppings amongst your tomatoes, chances are a snail has been in your garden.

Even though cleaning up after them can be a bit overwhelming, snails can be excellent pets even if you’d rather they stay out of your garden.

link to How Far Can A Snail Travel