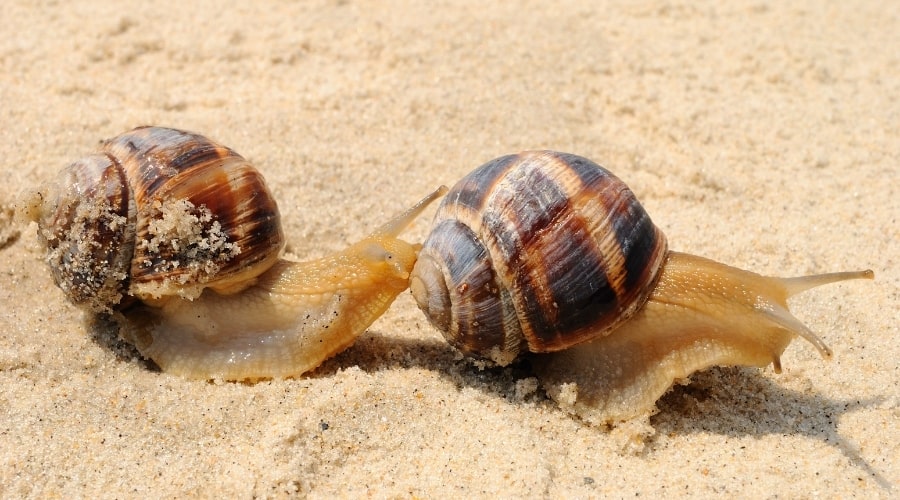 Snails don’t have a unified brain like most animals that think and feel. Instead, they have a series of cerebral ganglia and use only two cells to make complex decisions about eating.

Bizarrely, snails do sometimes react like they have feelings, but their minds are different from reptiles, birds, or mammals. You’ll never see a snail upset because they aren’t deep thinkers.

I will help you discover everything about snails’ feelings, emotions, and physical responses.

Do Snails Have Feelings

Snails do not have feelings as we recognize them. Snails can’t process emotional information or physical sensations since they possess only a fundamental nervous system and an extremely primitive brain. As a result of their simplified system, snails do not feel physical pain. However, a snail is capable of Associative Learning despite its limitations.

Like other simple-brained animals such as worms and lobsters, snails do not have emotional feelings. Snails do not feel love, and they do not bond with mates or owners.

The human tendency to anthropomorphize or assign human traits to animals does not mean they truly possess those traits.

As hermaphrodites, when many species of snails mate, they can both produce and fertilize eggs. Hermaphrodite snails actually stab each other with ‘love darts’ to mate.

According to National Geographic, doing this can even cause damage. Unlike mammals who raise their young and nurture them with a mate, snails do not require this bond to pass on their genetics successfully.

Do Snails Have Emotions

Emotions and feelings in snails can be tough to identify. For snails, who lack the capacity for complex processing, very little in life indicates they could have even rudimentary feelings.

However, we know that you have to remember it later to attach significance to something and ‘feel’ a certain way about it. Memory, therefore, forms the basis of emotional intelligence.

Some snails have memories that don’t last a day. Meanwhile, other ‘smarter’ snails can hold on to information for about a week. If a snail felt emotional, the sensation would not last long by human standards.

Snails do not cry in the way people cry, from pain, fear, or ‘gunk’ in the eye. However, in a strange twist, snails are almost constantly crying because their entire body is similar to an eye.

Snails, like eyes, are soft, unprotected sensory collecting tissue masses that require constant hydration. The nature of a snail’s body causes it to weep fluids constantly.

Do Snails Get Lonely

Stress isn’t quite the same as longing for companionship, but it is a step on the road to those feelings. A snail can feel stress from being isolated.

Oddly, it seems that snails with good memories are more likely to need ‘friends’ to form long-term memory.

Meanwhile, snails who don’t have good memories, to begin with, can take the stress of being alone more easily.

Do Snails Get Sad

Because they move slow and appear somewhat droopy and even weepy-looking, humans often think of snails as ‘sad.’

Depression and sorrow are complex emotions beyond the capability of the ganglia clusters a snail uses in place of a more evolved brain.

Can Snails Bond With Owner

Snails can sort of bond with their owners. Though these blissfully simple creatures don’t have good eyes to see you with, they have a superb sense of smell.

Moreover, a snail can remember enough to associate specific scents with food or basic safety like warmth. In short, your snail can smell you coming and learn to associate that scent with positive things.

Do Snails Feel Pain When Crushed

The sensation of pain is one of the most horrifying things that can happen to any living thing. However, it is hard to tell if they feel pain when dealing with simple ganglia-brained creatures like snails.

Certainly, they sense heat, salt, and other negative environmental issues. They will try and avoid those things in the future once they have discovered them.

Regrettably, that does not tell us whether the negative impact causes ‘pain,’ they can ‘feel’ or if they are only hardwired for basic survival.

Do Garden Snails Have Feelings

Garden snails do not have feelings. According to SchwitzSplinters, snails are only sensitive to light, dark, and noxious substances.

They mostly ‘feel’ their way through mechanoreception (touch) and chemoreception (smell). So, in a certain light, you could say garden snails have feelings because they have senses, but those are only physical sensations, not emotional reactions.

The garden snail has about forty thousand neurons, which seems like a lot until you realize that even the tiny fruit fly has a quarter of a million neurons in its brain.

Additionally, these neurons are clumped together in groups called ganglia. Intriguingly, most of these ganglia are predominantly arranged around its esophagus.

Most of a snail’s mental energy is focused on when and what to eat. You could make the joke that snails are literally always thinking about food.

Do Mystery Snails Have Feelings

While mystery snails don’t have feelings per see, they are sociable with others of their species.

Mystery snails seem to enjoy the presence of other mystery snails beyond mere mating antics. They will spend time near others if given the opportunity.

However, these snails do not have a sense of companionship. Ultimately, the response is a survival skill. When you are small, having a hard shell is one way to defend yourself.

Alternately, choosing to spend time in a group of similar creatures also makes you less likely to become the chosen prey for nearby predators seeking an easy meal.

Helpful Tips To Know If Snails Have Feelings

Whether you are a pet owner, general animal lover, or just a nice person, you probably want to know if snails have feelings because you assume they do.

Unfortunately, there’s no indication that snails feel much, either physically or emotionally. On the plus side, they may have the evolutionary beginnings that lead to feelings and emotions, but for now, the answer is most likely still a no.

Here are a few helpful tips to know more about whether snails have feelings:

Just because a snail’s brain is different doesn’t mean they are incapable of thought. That said, snails do not have feelings in any way we as humans would recognize them.

Since they have no pain receptors, snails can’t feel things physically. Plus, snails lack the basic facilities and intellect to process any sort of emotions.

The closest snails get to feelings are demi-thoughts like ‘I’m hungry’ and ‘Oh look, there’s food here.’

link to Do Snails Poop

Snails are herbivores, so they eat anything from leaves and fruit to mushrooms. If a snail can’t find a living plant, it will also eat ones that have decayed. After all the food they eat, do snails...

Continue Reading
link to How Far Can A Snail Travel