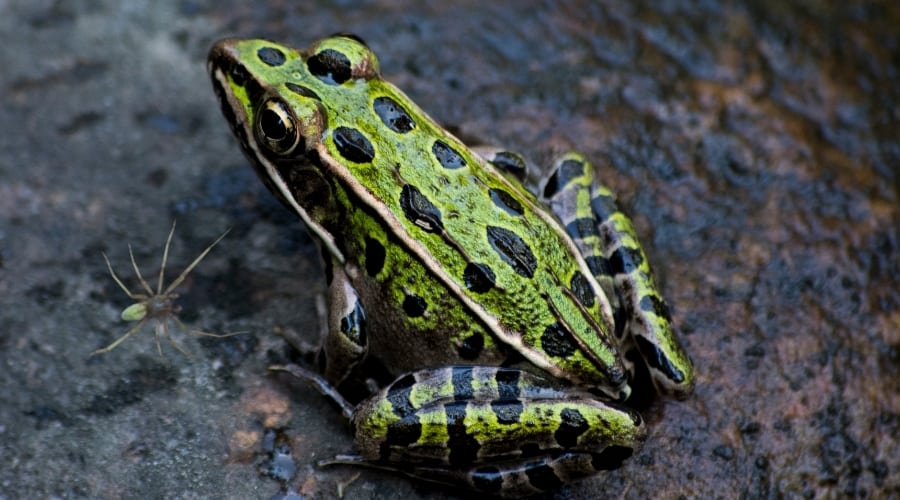 Frogs are famous for their long, sticky tongues and propensity for eating bugs, but can frogs eat spiders? As predators, frogs aren’t concerned about danger and will gobble down anything living they can fit in their mouths.

Although it doesn’t always work out for the frog, their speedy reflexes and powerful jaw are usually enough to hunt prey that could kill them if it had time to bite.

Frogs often do eat spiders by catching them with their tongue and using their saliva to encase them with moisture as their tongue flicks back into their mouth crushing the spider. A frog can safely digest spiders and bugs that might otherwise kill them. Spiders, like other toxic insects, are only a problem if they bite the frog.

How Do Frogs Eat Spiders

If you’re going to eat something toxic, it’s best to kill it quickly. For a frog to eat a spider, speed and a powerful jaw equal safety and lunch.

This is where those long and sticky tongues come in handy. Most spiders don’t have time to react. They are pulled through the air in an instant and crushed before they can bite.

Venom is digestible. However, if the frog gets bitten, that toxin goes into the vascular system and gets pumped around its body.

Blood doesn’t have the ability to break down poison. Luckily acid, such as that found in the stomach, can handle venom.

How Do Frogs Eat Spiders Without Getting Bit

The moisture immediately surrounds and encases anything it touches. Since the saliva is still connected to the tongue, the return motion brings the bug, saliva, and tongue to the mouth.

Secondly, a frog’s tongue is connected to the front of its mouth and lower jaw. This allows it to rotate and flick outward quickly, then return in a flash.

Once prey is inside the frog’s mouth, it snaps shut. The crushing force kills the spider or other insect instantly.

How Often Do Frogs Eat Spiders

Most mature frogs only need to eat every two to three days. A larger frog who ingests larger prey items will eat less than a smaller frog who digests little meals more rapidly. Froglets, on the other hand, may need daily feeding.

A frog will eat any spider it comes across when it is hungry. Frogs may eat several insects in a day if they are small.

In theory, some frogs could eat several small spiders a day. However, they would only do that if there were no other food available.

Typically, spider poison isn’t an issue for frogs. Because of their unique hunting method, any prey they catch is dead before it has a chance to fight back.

Since the venom is only problematic when injected, the frog is safe. Sadly, if a poison spider bites a frog, it will die.

According to Livescience, some spiders like the Huntsman eat frogs. These unique spiders build traps out of leaves and silk. Doing this allows them to ensnare larger prey.

A frog will starve to death rather than eat dead bugs most of the time. Amphibians are not scavengers, and they do not digest rancid meat.

Instead, they require living prey. Your frog may not even recognize dead bugs as a food source.

Since live insects are often highly animated in their movements, the lifeless lump of a deceased corpse probably doesn’t resemble dinner as your frog knows it.

Do not feed dead bugs to a pet frog as it can make them ill if they eat it at all.

Tree frogs, like most non-aquatic species of frog, will happily eat spiders. If you have tree frogs outside in your garden, likely, they are occasionally snacking on spiders.

However, it would be best if you never offered a captive tree frog a spider. Keeping your pets safe and alive is more important than checking to see if they can do a cool trick.

Like other spiders, Black widows are fair game to a frog. These incredibly poisonous spiders pose a danger to anything they bite, including humans. Luckily, black widows aren’t aggressive unless frightened.

If your frog scared the spider, it might bite them. Happily, a frog’s ambush hunting tactic doesn’t leave time for a bite in the wild. Still, it’s never worth risking a pet’s life.

Although a frog could eat a jumping spider if it caught one, scientists have recently discovered that these spiders are hunting the frogs in some cases.

According to Phys.org, researchers from Switzerland recently documented Regal Jumping Spiders hunting frogs and other prey items that are substantially larger than the spiders themselves.

As the largest of all North American frogs, a Bullfrog can measure up to eight inches and weigh a pound. At that size, it is likely they would seek out larger food items.

However, a young Bullfrog or a hungry one might eat smaller insects and spiders.

Frogs are not picky eaters, and Bullfrogs are no exception. If anything, the massive Bullfrogs eat more variety simply because they can.

Garden Frog is a generic term for many small frogs, including the Common Frog. Usually, a garden frog is a small member of its species.

Since only the larger frogs, like Bullfrogs, tend to eat larger prey, it is safe to say a so-called garden frog would eat a spider.

Aquatic frogs are the only other type of ‘garden’ frog that is unlikely to eat spiders. These species live their lives mostly in water.

As a result of their lifestyle, aquatic frogs tend to eat water, insects, and small invertebrates. They might also find tiny fish make a good snack.

However, since most spiders don’t go into the water, aquatic garden frogs are less prone to encounter and eat them.

Frogs hatch from eggs and go through several life stages. Since a ‘baby frog’ is a tadpole, they live their lives in the water.

Baby frogs not only do not eat spiders, but they also eat no insects at all. Tadpoles are mostly vegans. However, they may eat their own eggs or insect larvae if it is available.

A baby frog will eat pond algae and other small bits of vegetation as they grow. Tadpoles are tiny and have much weaker jaws than adults.

If you’re keeping tadpoles at home, you can offer them leafy green plants, but keep in mind they may need to be boiled or frozen first, so they break down easily.

Raising frogs can be a lot of fun at home, and it can help with pest insect control if you keep them in a garden. Don’t take wild frog eggs.

Novices can mistake these for toad eggs, and toads are more likely to be toxic. It is vital to make sure you know what species you have so you can meet all their needs.

Sometimes frogs eat spiders, but it can also go the other way around. Poisonous spiders can and will also bite a frog or other large predator as a form of self-defense.

Resultantly, feeding your pet frog spiders is a bad idea. In nature, frogs are opportunistic carnivores who will eat just about anything they can catch, but that doesn’t make it good for them.

Stick to poison-free prey when raising frogs in captivity.

link to Do Flies Come Back To Life

Death by salt. Sounds strange for rats, doesn't it? Chances are you have never thought about it that way until now. Studies show that about 14 million American homes are infested with these rodents,...