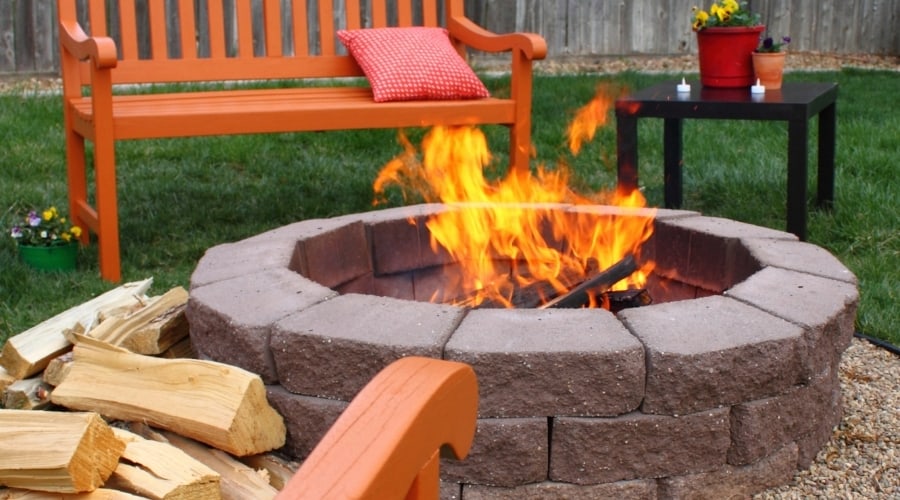 A fire pit is a great way to make your backyard more enjoyable, but it can also emit an unpleasant smell. The odor of smoke from the fire pit can linger for days after the event.

A fire pit will have a distinctive smell depending on what is burning inside. In this post I will discuss the different ways in which these fumes will cause you and your clothes to smell like smoke.

Do Fire Pits Make You Smell Of Smoke

In a word, yes. Some clever technologies are allowing smoke-conscious homeowners to reduce the harmful emissions and strong odors produced by their backyard burners.

However, these new smokeless fire pits can be very pricey, and they only minimize smoky smells. They don’t entirely eliminate odors.

It’s no surprise that 57% of fire pit owners in the United States still have what’s called a classic fire pit. This is your basic wood-fueled burner that can be fashioned out of almost anything.

All you need is a heatproof bowl or container and a whole lot of kindling. It’s essentially a small, contained bonfire and it will make your clothes, hair and skin smell very smoky.

Why? Because wood consists of large, densely packed molecules and some of them become volatilized when they combust.

These molecules do not turn into small gaseous molecules (like CO2) along with the rest. Instead, they form a greasy vapor that adheres to surfaces as it cools and falls through the atmosphere.

Smoke particles literally are stickier and clingier than lots of other odor-causing substances. You’re right if you’ve ever complained about smoky fire pit smells lingering for longer than other smells. They do. But there are solutions.

We’ve established that wood-burning fire pits are pretty smelly places to spend time. But what about propane fire pits? If you’ve ever used or been close to a natural gas fire pit, you’ll have noticed they don’t produce many residues.

Even to the naked eye, natural gas pits look much cleaner and generate fewer emissions.

The difference relates to their comparative efficiency. When wood combusts, some of its molecules volatilize and escape into the atmosphere rather than being burned up.

These molecules then land on your clothes and because they’re sticky, their odor seems to follow you around for days. Propane is a clean fuel that burns with more efficiency than wood.

Almost none of its molecules are volatilized so there are no escapees to produce lingering smells. Compared with classic fire pits, natural gas pits are practically smoke-free and won’t make your clothes smell.

In the interests of science and experimentation, I tracked down a guy from my neighborhood who’s just bought himself a smokeless fire pit. I asked if I could put it to the test and see whether its claims hold water.

With a healthy dose of skepticism, I fired it up and stood much closer than I’m sure the manufacturer advises.

The first thing to know is there’s no such thing as a completely smokeless wood burner. Even fire pits with smokeless designs produce small amounts of smoke but this is significantly less than what you’d expect from a standard pit.

I noticed a slight smell on my clothes after sitting by the fire for several hours. However, it was much less pungent and seemed to wash off my skin and hair much easier than smoke from a wood fire.

Smokeless fire pits work by increasing airflow around the wood as it burns. They use specially shaped combustion containers to maximize both oxygen and heat and this helps the fuel get closer to a point of complete combustion.

Though it can’t burn with the same efficiency as natural gas, more of the wood’s molecules get ‘cleanly’ used. Less smoke is produced, and fewer residues stick to your clothes.

How To Get Rid Of Fire Pit Smell

Having been at more than my fair share of backyard bonfires, I’ve picked up some tips for getting that greasy, sticky smoke smell out of clothes:

When I discussed this topic with friends, I wasn’t surprised to find that opinions differ on how annoying fire pit smells can be.

It got me thinking about what smoke actually smells like. What do fire pits smell like? The answer depends on what’s being burned in them. Fire doesn’t have an odor, all of the smells come from the combusting materials.

It means fire pits can produce many different types of smell. Paper has a slightly sweet undertone. Dry leaves and desiccated wood can produce a syrupy odor a little like brown sugar.

Generally, fire pit logs have a deep but smooth odor. It’s important to note that every type of wood will have a unique smell. There is no “one fits all” odor for backyard fire pits.

If you want to experiment with different burning smells to find out if some are less smoky than others, I recommend trying a variety of woods. They’re all going to produce smoky odors, but some will be less pungent than others.

Natural gas fire pits produce virtually no smoke making them odor-free. Natural gases such as propane get much closer to achieving complete combustion than wood ever can as wood is a surprisingly inefficient fuel source.

More gas molecules get used up in the burning process so there are fewer left to enter the atmosphere and to rise, fall and settle on your clothes later.

If you have a smelly propane fire pit, there may be something wrong with it. You shouldn’t experience any strong odors of smoke or gas with a propane burner.

Anything stronger than a brief whiff of propane after you first light the pit is abnormal and should be investigated. Extinguish the fire. Check thoroughly to make sure there isn’t a gas leak before you light it again.

If there are no obvious leaks but you can smell a strong odor of gas, leave the pit cold until you can get an expert to service it.

Unlike natural gases, wood produces a lot of waste material as it combusts. Soot and smoke are two examples that can wreak havoc with clothes, skin and hair.

They’re products of incomplete fossil fuel burning, residual substances that get thrown into the air and attach themselves to people and fabrics when they fall.

It’s the main reason wood fire pits are so smelly. You may not be able to see them with the naked eye but you’re being covered in a fine shower of smoke molecules every time you sit close to a wood fire.

The best way to reduce these smoky odors is to use a fire pit that’s designed to maximize airflow and help the flames get hot enough to burn away more waste material.

Otherwise, you’ll have to get used to boil-washing your clothes after a backyard burning session.

How Do You Stop A Fire Pit From Smelling

There is no way to entirely eliminate the smoky odors generated by a wood fire. Even smokeless fire pits can’t neutralize all the smells though they do significantly lessen harsh, pungent odors.

Remember, it’s not the fire that’s causing these undesirable smells. It’s the type of fuel you’re burning and how efficiently it combusts.

You can lessen the potency of smoky smells by making some adjustments to how and what you burn.

Here are some steps you can take:

Let’s take a closer look at smokeless fire pits and see what features they provide to homeowners interested in a cleaner burn.

I’ve picked one of the most popular product online, the Solo Stove Smokeless Bonfire Fire Pit, because it has hundreds of reviews and they can give us a taste of what it’s capable of.

The question is, does it work? The Solo Stove has a very clever design. It’s got a series of air vents in its base which direct oxygen up and into the flames.

This keeps the fire burning hot enough to combust at maximum efficiency so that it burns off as much waste material as possible. This means fewer residues and far fewer smoke molecules lingering in the atmosphere.

People who’ve used this smokeless fire pit say it generates significantly less smoke than a conventional wood-burning pit. Though it seems to smoke a lot to begin with, the amount of smoke decreases once the fire is burning strong and air has started to circulate through the vents.

Most of the reviews say there’s a remarkable difference in the amount of pungent, smoky odors left lingering on clothes after use.

Helpful Tips To Keep Fire Pits From Making You Smell

Fire pits are a great way to stay warm in the winter and enjoy time outdoors with friends. However, you should be aware that fire pits do make you smell, even if it is smokeless.

There are many different types of fire pits, and they all produce a distinct smell depending on what material you are burning. The smell of smoke from a fire pit will cling to your clothes and linger in the air.

link to How Do Electric Fire Pits Work

While researching the different types of fire pits to put in my backyard, I found myself wondering how do electric fire pits work. Though most of us are used to indoor igniters like electric...