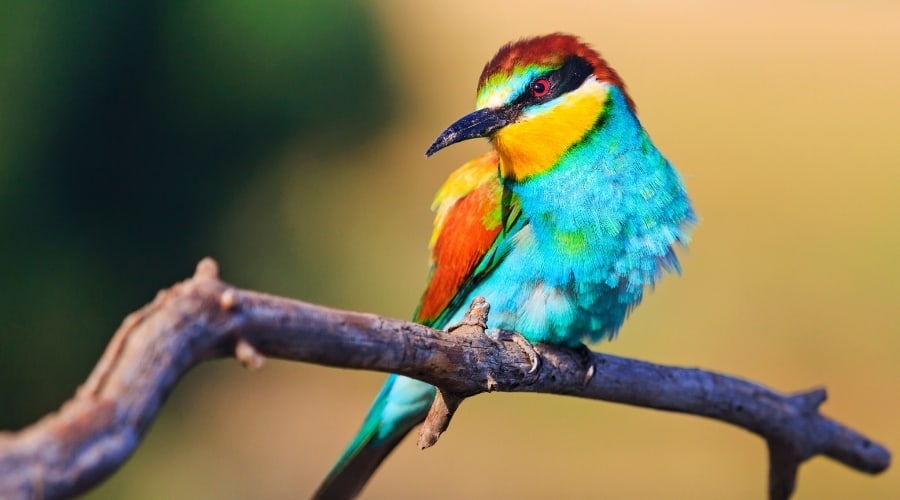 The way vinegar affects birds is surprisingly complex. Why do birds hate the smell of vinegar and why is it a fantastic natural repellent?

Vinegar works as a natural repellent for many species of birds because it has a pungent odor from the acetic acid and can cause irritation if it touches the skin. Its topical effects are similar to chili powder which is another common bird deterrent.

The great thing about vinegar is it has no effect on plant life when applied in a diluted form. Combine vinegar and water in a spray bottle and you can spritz a vegetable patch or flower bed every day and cause no damage to the plants. But it will deter curious birds who can’t tolerate vinegar’s sour, nose-wrinkling odor.

Let’s dig a little deeper into how it works and, most importantly, whether it has any adverse effects on the birds’ health. We want to keep them away, not harm them.

There’s debate over how well birds can really smell the vinegar. Their olfactory glands, while functional, are a lot less powerful than ours. Birds don’t utilize their sense of smell anywhere near as often as mammals do, relying instead on sight and sound.

Nevertheless, they do have a sense of smell and can detect the sourness of freshly sprayed vinegar. The problem is the odor doesn’t last long especially when it’s sprayed outdoors.

I know this because vinegar is routinely used by bird owners to disinfectant water baths and cages. In a diluted form, it’s a non-toxic, highly effective bacteria killer.

Spraying diluted apple cider vinegar on a bird’s cage kills harmful fungi and bacteria without harming the bird. The smell is initially very pungent, but it fades quickly.

Do Birds Dislike The Smell of Vinegar

We know birds can pick up the smell of freshly sprayed vinegar but they’re less likely to detect old scents. Like some humans, they dislike the odor of fresh vinegar because it’s sour and seems to get stuck in the nose.

Vinegar has a sharpness that can sometimes irritate the skin around the nostrils, but this is a temporary effect.

It’s the acetic acid in vinegar that’s responsible for its strong odor. Vinegar is made up of 5% acetic acid and the rest is just water.

Acetic acid is pretty powerful stuff which is why vinegar needs to be diluted before it’s used around animals. The clue is in the name; it’s an acid. It makes a great cleaner because it burns away bacteria and other nasties.

I want to stress that spraying vinegar on your garden plants even in a poorly diluted form is unlikely to kill any birds. The reason it needs diluting is the acetic acid reacts with tissues and causes irritation.

A bird sprayed with undiluted vinegar is highly unlikely to die but he might be in pain for some time.

Will The Smell of Vinegar Keep Birds Away

The smell of freshly sprayed vinegar will deter birds from attacking plants or building nests in unsuitable places for a brief while.

When the solution dries, the smell goes with it. Short of standing outside and spritzing every ten minutes, you’re not going to keep the birds away for long with just vinegar.

Its why gardeners have come up with some crafty workarounds. Many add crushed garlic or lemon to their apple cider vinegar solution.

These substances are similarly pungent, but their odor lasts for much longer. When combined with the acid in vinegar, they create a mild irritant that also smells deeply unpleasant.

Here are some DIY vinegar bird repellents you can try for yourself:

WARNING – Do not spray lemon oil or juice directly onto plants. Unlike vinegar, it can harm them. Instead, soak cotton balls in your bird repellent and place them around any plants you want to protect.

It’s safe to apply vinegar, garlic and chili to plants in small, diluted amounts. It’s not safe to apply lemon to your plants. It will kill all your weeds, but it’ll take your strawberries with them. Trust me, I’ve tried it.

Is The Smell of Vinegar Harmful To Birds

The smell of vinegar is in no way harmful to birds. As soon as it dries, the smell vanishes and even when freshly sprayed and at its most pungent, it’s just unpleasant. It can’t harm the animals.

The acetic acid that creates the sour smell is far too diluted for that.

Unless a bird is extremely sick and frail, vinegar can’t permanently harm or kill birds. If not sufficiently diluted, it can cause skin irritation and pain but only temporarily.

Even a very strong vinegar solution is unlikely to hurt a bird for more than a couple of hours.

You must decide how much of a deterrent you want the vinegar to be. This is not an exact science and there are no definitive rules for how to do it.

As you’re highly unlikely to kill any birds, whether or not it’s cruel is a matter for debate. I prefer to keep things mild and give the feathery critters a little bit of a vinegar sting.

Some gardeners say a more painful deterrent discourages the birds from attacking the plants a second or third time and, therefore, saves them from more pain in the future.

Ironically, spraying vinegar in your garden might repel the birds and help them stay healthy. Acetic acid kills some bacteria and fungi that are harmful to birds and like to hang out around their feeding ledges, water baths and nests.

Helpful Tips To Know About Using Vinegar To Keep Birds Away

If you plan to use vinegar as a bird repellent, here are some important things to remember:

Vinegar is an underappreciated substance with so many interesting uses I can’t list them all here. It’s particularly valuable when used in the garden because it’s non-toxic to most animals.

As an animal lover, the last thing I want is to cause harm to the furry and feathery visitors in my backyard. But I do want them to nest far away from my plants. And now I’ve got the perfect way to ward them off with vinegar.

link to Will A Deer Bite You

Deer are wild animals that weigh at least seventy pounds and often much more. Of course, they can bite you.  Deer will bite people however it’s extremely rare. In almost every recorded...