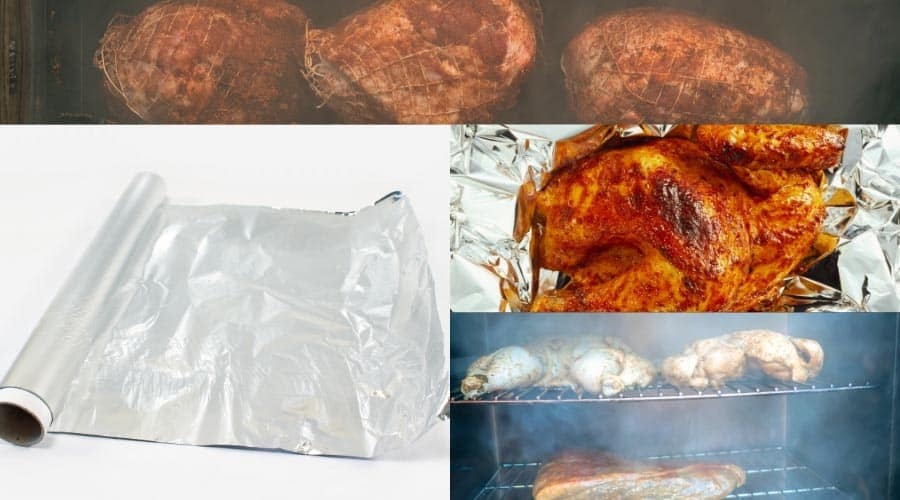 One often asked question among first time meat smokers, is whether or not it’s safe to add aluminum foil to the smoking process, for example, as part of brisket or rib wraps. Can you use aluminum foil in an electric smoker without negatively affecting the quality of your food?

Aluminum is an excellent conductor and contributes to the production of convection heat, so cooking times will be significantly reduced when you use aluminum foil in an electric smoker. However, your meat will taste a little less smoky because the foil will obstruct the smoke from penetrating the meat.

It’s a simple question with a pretty straightforward answer, though different manufacturers say different things in their product manuals.

If we put the broader health concerns about aluminum leaching into the food aside and just consider its safety in electric smokers, the answer is yes you can use aluminum foil in an electric smoker.

This article discusses the pros and cons of smoking with aluminum foil and asks whether wrapping meat is the best way to guarantee perfect barbecue every time.

The popularity of electric smokers has soared over recent years as more home chefs experiment with traditional barbecuing techniques. The most common reason for smoking meats, particularly large cuts, in foil is faster tenderization.

Since aluminum is an excellent conductor and contributes to the production of convection heat, cooking times can be significantly reduced when foods are foil wrapped.

As smoking is a notoriously ‘low and slow’ process, some cooks just appreciate having the option to speed things up and enjoy that authentic barbecue flavor without committing twelve hours to the project.

Foil wrapping is especially useful for tougher cuts of meat like ribs, beef brisket and pork shoulder: precisely the type of meats that smoking was originally created for.

Including 1 to 2 ounces of liquid in a brisket foil wrap will help your meat stay delightfully moist and retain as many of its juices as possible.

Beyond any concerns you might have about metal particles ending up in food – a different question altogether – there’s little evidence aluminum foil is unsafe in smokers when used correctly.

However, you must always be sure of the following before you start cooking:

There must be plenty of room for the heat and smoke to circulate around the meat and rise to the top of the cooker.

The foil should never touch the sides of the cooker as water and meat drippings can end up moving horizontally and then dripping down the sides of the smoker instead of vertically into the collection pan.

If both of these guidelines are followed, there is no risk of fire when using foil in an electric smoker.

In fact, making aluminum foil part of your smoking process can be a great way to tenderize large cuts of meat and speed up their overall cooking time.

Many experienced barbecue masters rely on foil for sealing moisture into low and slow smoked briskets.

What To Do About Smoke Penetration

An obvious downside to using aluminum foil in an electric smoker (or any type of smoker) is reduced smoke penetration.

As this is the primary purpose of smoking – to produce that distinctly smoky, slightly charred barbecue flavor – it seems a little silly to wrap meat and obstruct the smoke from reaching it.

The truth is your meat will taste less smoky if it has been cooked in a foil wrap. It’s the compromise for cutting several hours off its total cooking time. Sometimes, it’s worth it. It all depends on your circumstances and what you’re trying to achieve at the time.

What you can do to ensure your meat enjoys as much smoke penetration as possible, while also cooking quickly and staying perfectly moist, is cook it uncovered for a time before foil wrapping it, after foil wrapping it, or both.

If you have the time to closely attend to a brisket or pork shoulder, you can start it uncovered, add aluminum foil for the longest stretch of smoking, then uncover it again for the last hour or two of cooking.

Just make sure there’s plenty of tenderizing liquid inside the wrap when you cover it. This phased method is a clever way to guarantee the best of all worlds: melt in the mouth meat with juicy insides and a dark, deeply smoky crust.

When smoking a large piece of meat like a brisket, the recommendation is to smoke it uncovered until its internal temperature reads between 130 and 150°F. Then, wrap it for the majority of its remaining cooking time.

Should You Wrap Meat In Foil When Smoking

Yes, provided the heat has room to rise properly and the smoker’s dripping tray remains obstructed. Should you use foil in an electric smoker?

It’s a different kind of question and it depends on what you’re hoping to achieve. Barbecue pit masters would probably say it isn’t authentic and, if you want to smoke the old-fashioned way, you’ve got to ditch the foil.

Yet, even gold standard pit masters get a craving for smoked meat on days when hours are limited, and even they will ditch tradition when convenient.

If you regularly use aluminum foil in your kitchen, you may be unconcerned about its alleged impact on health.

Those worried about foil leaching might want to consider the risks more carefully but the only notable difference between oven and electric smoker cooking is the timeframe.

It could be argued that the risk of aluminum leaching is slightly higher in a smoker due to extended cooking times, but there are no additional dangers.

Aluminum behaves in the same way inside your smoker as it does in your oven.

Yes, meat cooks faster in an electric smoker when wrapped in foil. The metal is an efficient conductor that traps heat close to the surface of the meat.

When wrapped tightly, heat is prevented from escaping the foil parcel so, in some ways, it’s a like cooking in an oven inside another oven.

It’s more than possible to cut three (possibly even four) hours off the cooking time for a very large, thick piece of meat.

Always use a thermometer probe to monitor internal temperatures and determine when the meat is truly safe to eat.

Regardless of how it gets cooked, and whether you foil wrap it, your meat must reach the desired temperature before consumption.

When I smoke meats on the weekends, there are a lot of times that I don’t have hours to spend, so I use aluminum foil to speed up the cooking time.

I smoke my meat in my Masterbuilt Digital 30-inch Electric Smoker that I got on Amazon. It comes with 4 chrome smoking racks and a built-in digital control thermostat for even consistent smoking. 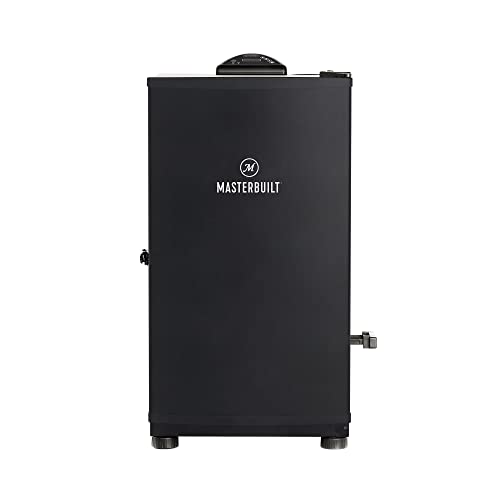 Which Side of The Aluminum Foil Should Touch The Food

It’s a hard myth to give up, but there’s truly no significant difference between the shiny and matte sides of aluminum foil.

It’s a common assumption to think the shinier surface reflects more heat and cooks food faster. It’s just not true. Any differences are negligible and so superficial they have no impact on cooking or smoking.

The important exception is for non-stick aluminum foil. The dull side of non-stick foil should always face the food to prevent sticking. It has nothing to do with speed of cooking or how aluminum affects the meat.

It’s important to take a balanced view when discussing the potential health risks of aluminum foil.

The general consensus from leading health experts is that cooking occasionally with aluminum poses no threat to health. As most of us aren’t cooking every meal we eat in aluminum, any risks are negligible.

If you were to cook in foil three or four times a week, there may be a slight increase in the alleged health risks.

Yet, this can be said for many different types of cooking and many barbecuing techniques, in particular.

We recommend you limit the amount of smoked meat consumed overall (not just meats cooked in aluminum foil), because smoking produces polycyclic aromatic hydrocarbons or carcinogens.

We know that aluminum foil emits aluminum particles when heated and some end up in our food.

According to the latest research, human bodies can safely tolerate around 2400mg of aluminum exposure per day. Some health risks are associated with amounts in excess of this figure, but it’s harder than you might think to surpass it.

Our bodies are efficient at processing the particles. It’s only when aluminum foil gets used excessively that problems become possible.

Acidic foods cause aluminum foil to leach particles at a slighter faster rate. This is worth considering before you foil wrap ingredients such as tomatoes, citrus fruits or vinegars in aluminum for smoking.

The same conditions apply whether cooking in an electric smoker or a standard oven.

Some cooks claim aluminum foil changes the taste and appearance of foods, while others believe there’s no significant difference.

If you want to find out for sure, try smoking some wrapped and unwrapped meats and comparing their flavors.

Can you use aluminum foil in an electric smoker? Yes, with a little careful thought and preparation.

There are no major safety risks and any possible risks to health are negligible provided you don’t use aluminum foil for every smoke.

You might get a barbecue purist or two who scoffs at the notion of smoking meat in foil.

However, it’s a perfectly good way to speed up the cooking process and enjoy tender, juicy briskets in half the usual time.

Foil wrapping is also less messy and can prevent an electric smoker from becoming grease caked and tough to clean.

The bottom line is it’s your choice. We recommend trying aluminum foil wraps at least once or twice because they produce the type of barbecue that runs grease down your chin and makes you feel like a caveman.

link to Propane vs Charcoal Smoker: Which One Is Better?

Are you afraid that it is impossible to find a perfect smoker for your favorite grilled cuisine? There is no denying that the choice will often be between propane vs charcoal smoker, as they both are...

Continue Reading
link to Top 2 Best Reverse Flow Smokers: Are They Worth It?