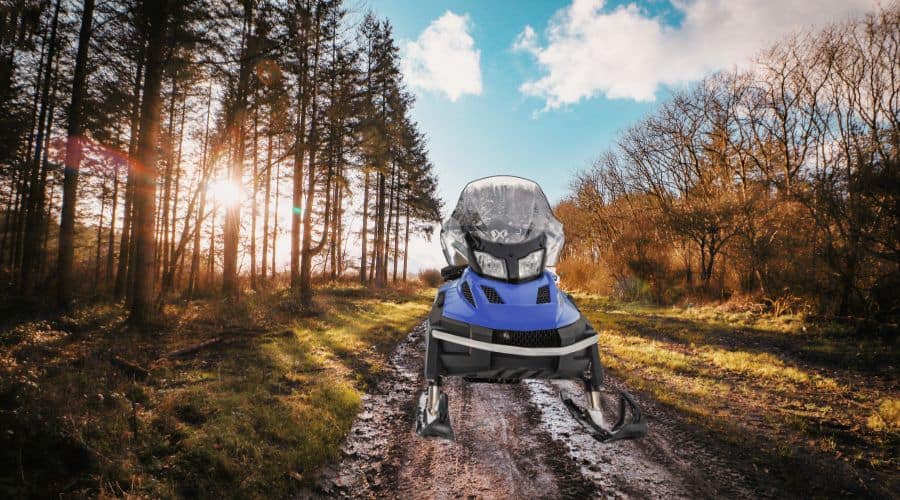 Snowmobiles are surprisingly hardy machines with tank-like tracks that can pass over a lot of surfaces. The rubber tread-style wheels are ideal for sitting atop a fresh or packed powder layer.

Riding on non-snow surfaces isn’t generally recommended, but that doesn’t necessarily mean the machine will balk and refuse to move over the ground. Can snowmobiles go on dirt?

Snowmobiles can navigate over dirt, mud, small rocks, and other non-snowy surfaces, however it is very hard on the sled and causes the engine to overwork itself. Your skis, tread, and the bottom surface of the snowmobile will become scratched and damaged.

Do Snowmobiles Work On Sand

Snowmobiles do work on sand. However, if you don’t want your sled to get full of grit and overheat, you may need to make some modifications.

For example, you will need filters, and a radiator like you’d need in a car.

The filters trap incoming sand and help keep it out of the engine. Without additional filters, the inside of your sled will become damaged.

Worse still, fine sand particles may collect inside various engine components, scratching them, polluting liquids, and settling into piles at the bottom of tanks and other compartments.

Sadly this can lead to costly engine repairs.

Will Riding On Dirt Damage Your Snowmobile

Driving on dirt will damage your snowmobile. Although avoiding every bit of bare earth and muddy patch isn’t always possible, staying on the snow as much as possible is wiser.

Your machine is quite literally designed to run over a frozen, snow-powdery, or icy surface.

When you pass over dirt, it kicks up rocks, pebbles, and other debris. This can damage every part of your snowmobile it comes in contact.

The skis are designed and used for sliding smoothly over a less granular surface and will get scraped up.

Ski skins can help with this, but they won’t stop the dirt from damaging other parts.

Your track is made of rubber, and though it can pass over dirt, grass, asphalt, and other surfaces, the more rigid and grainy or sharp the path below your track, the more it is abraiding it.

That rubbing and scratching can lead to worn-down treads and a torn track.

The chassis and track clips aren’t meant to handle gritty dirt particles. They can get scratched or even dented if there are larger rocks.

Finally, dirt can get inside your engine, as mentioned above.

Can You Drive A Snowmobile Without Snow

You can drive a snowmobile without snow. If you have ever been riding early or very late in the season, you have likely encountered bare patches of dirt or cold, muddy areas created by melting.

Your snowmobile passes over these just fine.

Similarly, you may already know that a snowmobile is excellent at tackling ice, such as frozen ponds.

Other surfaces where a snowmobile can drive include asphalt, dirt tracks, and even grassy areas, though short or mown grass is easier.

The only surfaces a snowmobile cannot handle are rough, rocky areas and slopes too steep for climbing with a heavy front end.

Can You Run A Snowmobile In The Summer

You can run a snowmobile in the summer, but the ability to do something doesn’t necessarily make it a good idea.

There are a couple of good reasons to turn a sled on during the hot season.

For example, running the engine for a few moments every month or so is an excellent idea when it’s put up awaiting the next snow.

Storage Rentals of America points out, “… you’ll get the best results if you can check on it once a month. Ideally, you should turn on the snowmobile’s engine once a month and run it for a few minutes. If you can’t start the snowmobile monthly, you may fog the engine to keep it lubricated… this will prevent any sediment from settling. Running the engine periodically prevents the vehicle’s seals from drying out.”

You want to run the engine for about 15 minutes. Doing this allows the system to reach operating temperatures and circulates enough gas and oil to help prevent typical storage issues.

Moreover, doing this enables you to catch any problems early and maintain your sled better.

When it comes to running the engine and driving your snowmobile around in summer, I recommend against it.

Although summertime grass-snowmobile races have become popular, you won’t be doing your machine any favors with this unseasonable use.

Riding A Snowmobile On Dirt Vs. Snow

The first thing you’ll probably notice when riding a snowmobile on dirt versus snow is how it feels.

Snow, even on a bumpy track that has lots of rough patches, is essentially a smooth ride.

The skis and wheels move over this wet surface very differently than on a dirt track.

By comparison, driving on dirt is bumpy and will bounce you around much more.

Tossing up a spray of snow as you move is also a lot quieter than throwing dirt, pebbles, and rocks.

Despite the inherent engine noise, driving on land is louder. Traditional round wheels are often the best choice for tackling dirt or pavement.

Your skis aren’t going to travel smoothly on a surface that is made up of hard, jagged materials.

Helpful Tips To Know About Snowmobiles Going On Dirt

You can take a snowmobile on dirt, but it’s a lot smarter and less damaging if you don’t. Small debris can easily damage the chassis and other parts made for winter.

Here are a few more helpful tips to know about snowmobiles going on dirt.

However, if you plan to use your snowmobile on dirt regularly, you need to be prepared for frequent repairs to the chassis, skis, track, and engine.

You can install a radiator and more filters to help minimize the damage from traveling over dirt, but it will still eventually cause your machine to overheat.

Driving a snowmobile across a small dirt patch is perfectly safe, but longer distances will probably result in expensive repairs, and you could even get stranded.

link to How Many Miles Do Snowmobiles Last

Snowmobile life expectancy often depends on the style of engine you have. Sleds have either 2-stroke or 4-stroke engines, and the difference in how they perform and how hard they work impacts their...

Continue Reading
link to Can A Snowmobile Go On Road