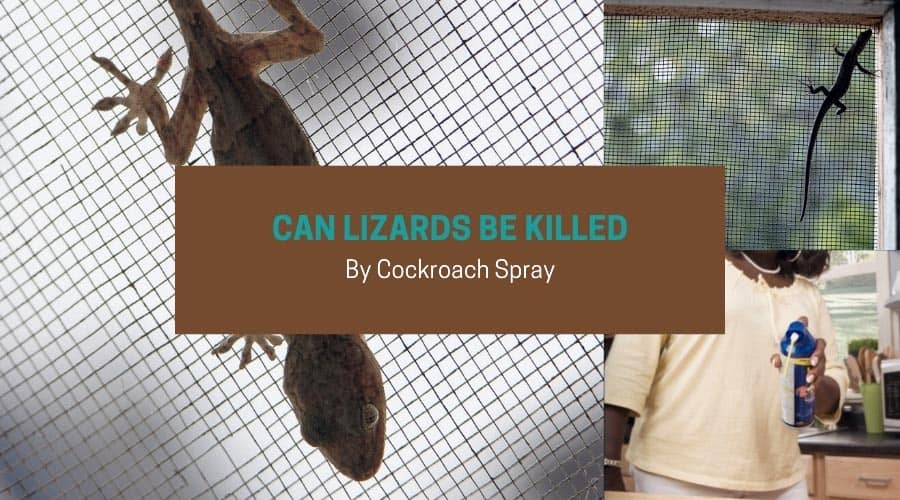 If you spot lizards crawling on your wall however the only chemical spray you have is for cockroaches, you are probably wondering can lizards be killed by cockroach spray? After all, you probably have a couple cans of cockroach spray underneath your kitchen sink.

Cockroach spray will kill lizards either by consuming the poison or if absorbed directly through their skin. Lizards have a high metabolism and a low metabolic rate, so they are unable to detoxify the insecticide poison quick enough to stay alive.

With so many cockroach sprays available, you might be confused if the one you have will kill lizards. Besides, you might not know how much or how often you need to apply the spray to eliminate the lizards for good.

Luckily, the detailed information below provides you with more than enough effective choices. So, let’s tell you everything you need to know about lizard killing sprays and how you can kill lizards using cockroach sprays.

According to a review on pesticide effects on lizards by the Department of Conservation in New Zealand, many types of pesticides have been used over the decades to get rid of lizards.

Insectivorous and predatory lizards are usually at risk of secondary poisoning when they consume poisoned prey. Some lizards were reported dead after their habitat was sprayed with termite control pesticide, which is proof that lizards are susceptible to insecticides.

The main reason lizards die from insecticides, such as cockroach spray, is their low metabolic rate. High metabolism ensures that the body quickly alters the poison’s chemical nature to render it less toxic; hence, with a low metabolic rate, the opposite is true.

Their inability to detoxify fast results in a quick death. Below are a few products to prove that lizards can be killed by cockroach spray.

The chemicals in insecticides are not only fatal to insects but to lizards too. For instance, any cockroach spray that contains Beta-cyfluthrin can kill lizards because it acts as a neurotoxin.

Bayer Advanced Home Pest Insect Killer Spray is effective in killing not just cockroaches but any other surface and soil insects. One of its active ingredients is Beta-cyfluthrin, which is toxic to lizards.

HIT spray is effective at paralyzing and sometimes killing lizards. Sometimes the lizards do not die, but they lie still after being sprayed with HIT, which gives you time to get rid of them.

If you are looking to get rid of lizards, the first thing you have to do is cut off their food supply, which means removing the pests and insects in your garden.

Therefore, search for effective bug sprays such as the Demon Max Insecticide which contains cypermethrin as an active ingredient.

Cypermethrin kills any crawling insects, and if you spray once or twice in a month, you will force the lizards to look for an alternative place to get some food.

Yes, bug spray does hurt lizards. Even if you are not interested in getting rid of the lizards, using bug spray to remove bugs will harm the lizards because they can inhale the chemicals.

Such chemicals can also find their way into water sources, and once the lizards drink, they are affected. Additionally, the lizard’s skin has pores that will absorb it from the air.

What Is The Best Lizard Repellent Spray?

Iguana-Rid is the best lizard repellent spray. It is not only useful in getting rid of the reptiles but also can be safely used around the home.

Iguana-Rid has a great rating on Amazon because it is safe for pets and humans, it is 100% natural, and ready to use. It gets rid of lizards, frogs, raccoons, snakes, and squirrels.

The repellent works by producing a taste and smell that most pests and rodents find repulsive, and at first, you will need to apply a large amount for it to be effective. For you to repel lizards completely, reapplying it after 30 days is recommended.

Yes, bleach does kill lizards because it contains corrosive chemicals, and if you pour it on the lizards, their skin will be burned. Besides killing the lizards, bleach also ensures that any eggs that were about to hatch are also eliminated.

No, baking soda will not kill lizards. Lizards feed on cockroaches, and since baking soda kills insects, once the lizard’s food source is removed, most likely, the lizards will move from your house to look for another means of survival.

It would not make any sense to stock up your home with different cockroach sprays hoping to eliminate lizards, because you are not sure if they will be effective. Luckily, you can know which cockroach spray will solve your lizard problem through these few tips:

Lizards can be beneficial when they eat other insects that are a nuisance in the garden or the house. However, if you do not find them useful and wish to get rid of them, you need to know can lizards be killed by cockroach spray.

There is no need to buy two different sprays to keep your home free from pests and reptiles. Besides, even if you can’t get a hold of the cockroach spray, you now know that bleach and Epsom salt are still viable options.

So, grab your cockroach spray and eliminate those pestering lizards from your home.

What backyard animals eat bananas? Bananas are famous fruits that are consumed worldwide by many animals. Sometimes even banana peels are used as feedstock for animals.