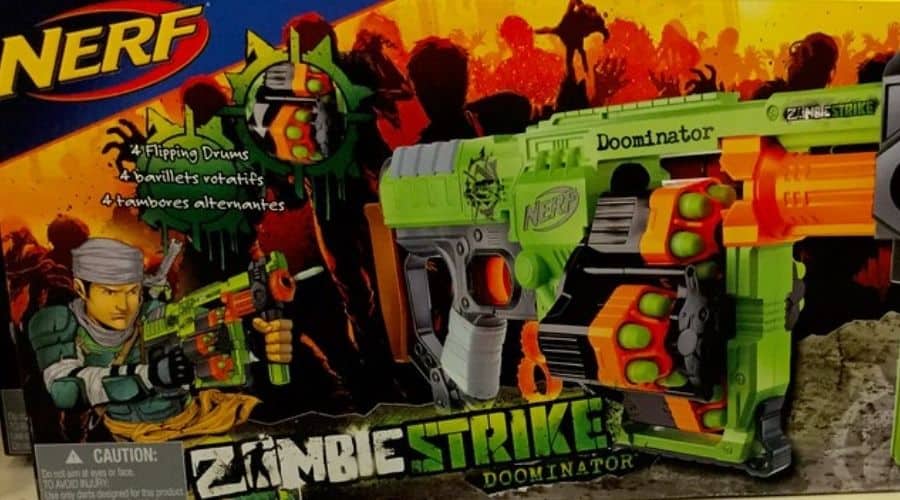 Although tag has been around for centuries, the modern Humans Versus Zombies variant was created in 2005 by students of Goucher University. Some games are so large that they require an online database to keep track of players, but small groups can play.

In fact, the more minor games are more challenging. What is the best Nerf gun for Humans vs zombies?

The best Nerf Gun for Humans vs Zombies is the Nerf Zombie Strike Slingfire Blaster because it has lever-action blasting that cocks in 2 ways, swing lever or flick to cock with 1 hand, as well as it comes with 6-dart clips and 6 Zombie strike darts. It is easy to hold and shoot weighing under 1 lb.

Sometimes you just want to feel like you’re living in a zombie apocalypse and playing Humans Vs. Zombies are a great way to do that.

Plus, you can meet interesting new friends with similar interests along the way if you join or start a larger game.

However, before you play, you need the right equipment. That’s where the top five best nerf guns for Humans vs Zombies come in.

Nerf saw the rise in popularity of zombies and zombie games, and they turned out their own zombie-hunt-themed blasters.

With faux weathering and incredible details, you don’t need to customize these blasters to drop into an HVZ game. You can grab and go slay zombies.

While any one of the outstanding options below will work, I honestly recommend carrying more than one blaster and a lot of backup ammo.

It may seem like having a ‘weapon’ is an obvious advantage against unarmed zombies, but they’re often sneaky, fast, and smarter than TV would have you believe.

The Nerf Zombie Strike Slingfire is the dystopian fantasy of a zombie fighting weapon. A unique shade of green isn’t quite neon but rather tinged with olive to give this blaster its unique style.

The faux wrapped handle has an intentionally messy spray-painted look to its Z-logo.

You can cock the Slingfire two ways. Choose from the swingarm or a flick-to-cock option for one-handed firing.

Meanwhile, a six dart clip offers you multiple shots and fast loading so you can keep firing. Plus, a tactical rail upgrade is available separately so that you can add accessories.

Best of all, the Nerf Zombie Strike Slingfire is durable yet lightweight. At just under a pound, you can easily carry the Slingfire for hours.

The design is broader and more substantial than many blasters, so it can take a beating and keep firing. 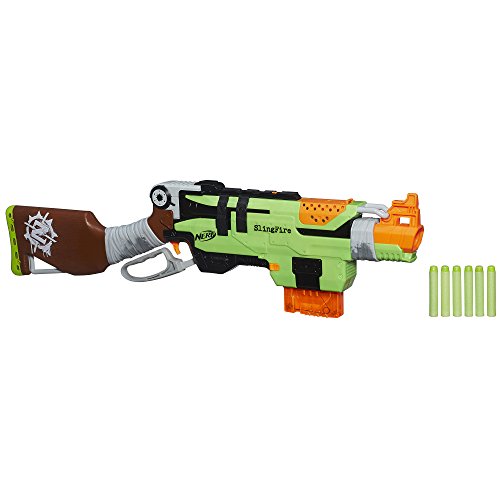 With a name like Nerf Zombie Strike Revoltinator, you have to expect great things, and this blaster delivers.

A neon green, orange, and grey colorway mean this blaster is suitable for almost any HVZ game anywhere. Plus, it just looks cool, but the features go much deeper than its outstanding appearance.

This motorized Nerf gun blasts eighteen darts from a motorized engine. All you have to do to stop those zombies is point and spray. Better still, the Nerf Zombie Strike Revoltinator has two tactical rails so you can add accessories.

The Revoltinator adds to the fun with lights and sounds. Most importantly, you have a scope for when you need to set your sights on one zombie in a crowd. 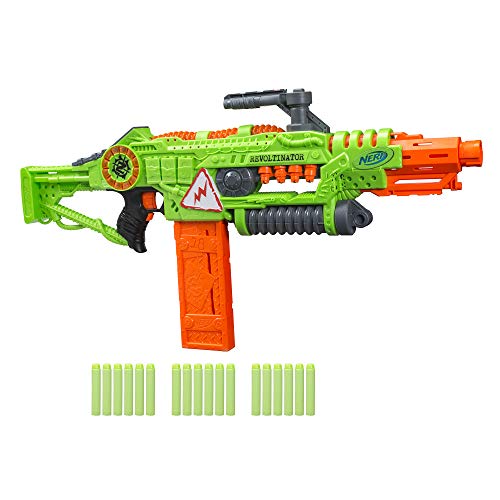 When you head out to battle zombies, bring the Nerf Zombie Strike Ghoulgrinder Blaster.

This intimidating blaster is orange, green, and grey with an incredible grinding wheel-like front end that feeds darts into the chamber for firing. It doesn’t get much more cool-looking than this.

This blaster fires up to ten darts using bolt action, and it can store five more for fast reloads. With no batteries, you’ll never have to worry about running out of power unless the zombies eat your arms, that is.

An optional barrel extension offers even more blasting fun to help keep you in the game.

The most exciting part of the Nerf Zombie Strike Ghoulgrinder Blaster is its removable stock. The whole Nerf Zombie series was created to be more customizable and play into the idea of a post-apocalyptic world where you have to live by your wits and build your own blasters. 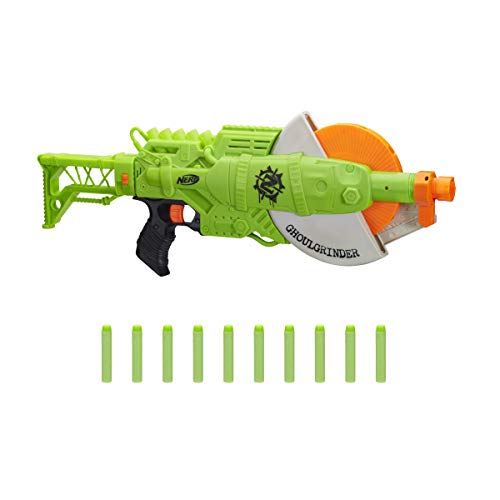 Strike fear into the hearts of all Zombies with your Zombie Nerf Gun Crossbow. Unlike standard Nerf blasters, this crossbow uses unique bolts.

Like this one, all the Mega series blasters feature Mega Whistler darts that scream as they fly through the air. All you have to do is post up and wait for unsuspecting zombies to wander past.

At two pounds, the Zombie Nerf Gun Crossbow is heftier than many of its cousins, but that weight translates into durability. When you’re ready to get serious about your HVZ, this is the blaster you need. 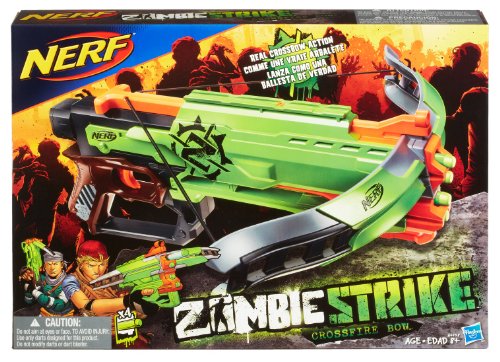 Every serious zombie hunter knows you need a backup piece, and there’s no better option than the Zombie Double Strike Nerf Gun.

The small size and lightweight combination mean you can easily pack a couple of these when your bigger HVZ primary weapons are empty.

The simple front-load design is made for fast reloads, so you can always bring backup darts for a run and gun.

Best of all, the concealability means you can be sneaky, and the Zombie Double Strike Nerf Gun is easier to pack away in your bookbag between classes for those big-campus Humans vs Zombie games. 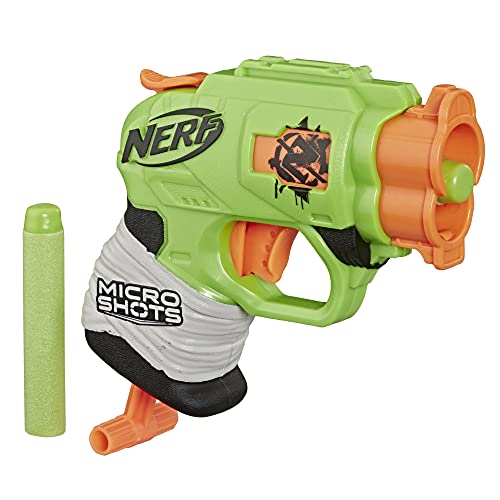 There are so many things to consider when buying a blaster. You should always look at ratings and whether it’s easy to customize or how heavy the blaster is if you’re planning to play a while.

However, there are some unique issues when playing Humans vs Zombies. I’ve put together the buying guide below to address the HVZ specific concerns for Nerf buying. Hopefully, this will help you survive the next wave of undead.

A single shot may be enough to save you, but only if you have good aim and there’s just one zombie. More likely than not, if you’re playing a larger game you will eventually find yourself in a situation with multiple zombies.

Even if you don’t, you’re going to want those extra shots. Always look at how many darts your blaster can carry and load at one time.

Pro Tip: Count your shots as you fire. Not only will this help you to know when it’s time to run, but it also tells you how many darts you need to collect later. The only thing worse than too few darts is losing the few you have.

Depending on where you’re playing and the rule variations for your particular game, you may want to conceal a blaster at some point.

Whether it’s in a backpack between classes or behind your back, so a stranger in a larger game doesn’t see you sneaking up on them, concealability is vital.

You might even want to stash extras around your play area, though that’s more useful for those playing at home.

Pro Tip: If you’re going to conceal your Nerf gun, you should probably conceal your ammo as well. Looking like an unarmed target can be a benefit, but no one is going to buy the act if you have bandoliers of spare darts across your chest.

3 – Is It Legal and Allowed

Always check the rules for the game you joined carefully. Most HVZ games require at least orange tips on Nerf blasters because it’s the law in many areas.

Plus, those orange tips help police and pedestrians know that you’re not carrying a real firearm.

Additionally, some groups limit the larger, auto-firing Nerf, or ask all players to restrict their ‘weapons’ in some other way.

Ensure that your Nerf is the right type for the game you’re playing so you don’t get kicked out. No one wants to miss out on the fun because of a simple failure to read the rules.

Pro Tip: Do you want to play by different rules? Try setting up your own game.

4 – Will It Survive The Apocalypse

If you’re going to hunt zombies, then the plan is to survive the apocalypse and come out on top. You can’t do that with a flimsy knockoff that every review warns you will fall apart in a day.

Humans vs Zombies can get pretty physical. It’s crucial to invest in a blaster that can take a few hard knocks. Otherwise, you’ll quickly find yourself out of a weapon, usually at the worst possible time.

Pro Tip: You also want to ensure that you pick a model that doesn’t jam easily. Maintaining your Nerf gun and darts in good condition is easier when it’s not prone to problems.

5 – How Fast Can You Reload

Speed loading is a skill unto itself. However, choosing the right Nerf blaster will help you if things get tight. All the ammo in the world won’t help you if you can’t get it into the firing chamber when you need it most.

I recommend practicing your reload skills. Pro Tip: You need spare darts. Don’t just stuff a handful in your pocket. They will bend and tear.

Instead, make sure you have fully loaded extra clips or a pouch you can access easily full of darts for faster loading.