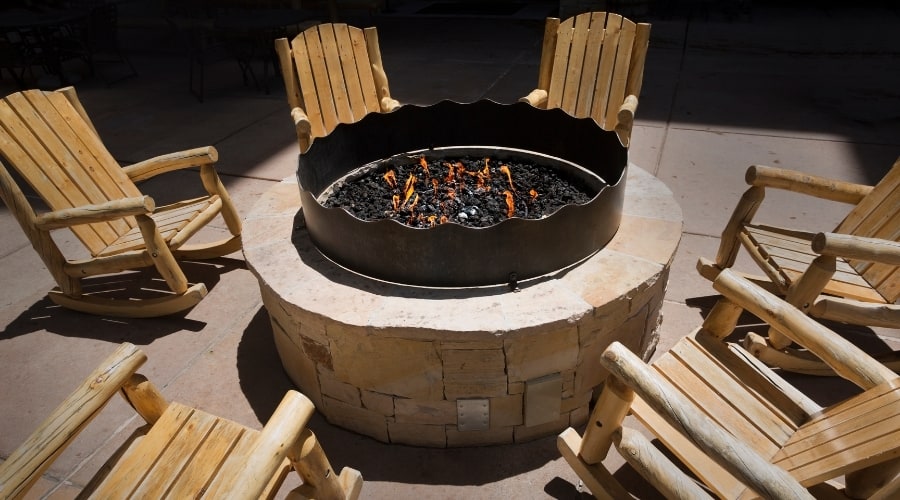 Open fire pits produce about a pound of smoke pollution per fire. That’s a lot more than you might expect. In fact, a single open pit fire puts out more pollution than a fireplace or tobacco smoke.

Smokeless fire pits are not completely smokeless, however due to their unique shape and smaller top opening design, they are more efficient and burns wood at a much slower rate. Having a smaller top opening traps smoke and burns it a second time, using most of the remaining particulate matter and it allows less air inside which forces the wood to burn slower.

Smokeless free pits may not be completely smokeless, but how do they have so much less smoke? I’ll explain the mechanics.

You might be surprised at the simple and innovative, and highly functional design of these pits.

Unlike old-fashioned fire pits, the smokeless fire pit is made to hold most of the fire and all of the smoke inside a chamber.

There is an outside layer and an inside container that usually has an overhanging lip. The lip makes the top opening smaller.

Having a smaller top opening serves two purposes. First, it traps smoke and burns it a second time, using most of the remaining particulate matter.

Second, it lets less air inside, which forces the wood to burn more slowly. A slower burn means less wasted material flying away in the smoke.

How Are Smokeless Fire Pits Smokeless

To understand how smokeless fire pits are smokeless, we have to go back and look at the evolution of how we build fires.

Our ancestors built fires right on top of the ground. While it’s not a great system, people still do this thoughtlessly today.

The problem with a flat-ground fire is that it is harder to control. Your wood burns up faster, and the ash and burning wood can roll away easily, plus it produces a ton of smoke.

However, you get a lot of heat immediately at the expense of a lot of wasted material. In short, you need a barrier. People solved this problem by making a ring of stones around their flat-ground fires.

While this worked better than laying burning sticks on the ground, it still wasn’t the best way to contain the fire and save on wood.

Since our ancestors couldn’t run down to the shop and get another log for the fire, it cost a lot of energy to bring wood home to camp. People needed a better solution.

By digging down a little bit, the logs didn’t roll, and it helped hold the fire.

Additionally, according to The Critical Condition, “The earliest fire pits were merely holes dug in the ground and were most likely used to reduce the visibility of the flame to predators or rival tribes in the surrounding area.”

Over many generations, people slowly added to this idea by lining the fire pit with sand or stone and building up the barrier until some fire pits had walls.

Doing this once meant that your fire was safer forever, or at least while you lived in the same place. Plus, it had the added benefit of storing heat in the pit itself to radiate out even after the more significant part of the blaze died down.

Once early humans reached the agricultural stage, we started building more permanent structures, and with them, we made advancements in fireplaces.

The idea of a contained fire that didn’t roll anywhere and directed its heat into the home was pure genius. In a sense, a fireplace is just another form of a fire pit, but it is usually elevated instead of dug down in.

A fireplace is walled on three sides. Fireplace smoke rises along with a large portion of the heat thanks to thermodynamics.

The rest of the heat gets directed out into the room. The raised-up fire pit also parleyed into other portable cooking devices like rolling grills.

Fire has more applications when you don’t need the earth nearby to be warm so you can sleep on it.

With the smokeless fire pit, you don’t need to generate vast amounts of heat or light, so containing the fire and double burning the smoke to reduce wasted material became possible.

It wasn’t until we reached the point where the fire could be a form of entertainment rather than a basic life necessity that this was a realistic goal. Smokeless fire pits are better for entertaining than cooking.

A smokeless fire pit is ‘smokeless’ because you sacrifice a lot of the heat by containing the fire inside a double chamber instead of letting it out.

While they still put off a fair amount of heat, enough to burn yourself, but it’s nowhere as much as a wasteful open pit fire.

Can You Make A Fire Pit Smokeless

You can build a DIY smokeless fire pit. However, converting an existing fire pit into a smokeless version would require more advanced tools and knowledge than the average DIY dynamo possesses.

The Dakota Fire Hole is the most straightforward self-made smokeless fire pit.

A Dakota Fire Hole requires soft earth to dig in. The nice thing about this style is that most people can accomplish it with a basic hand tool in an hour or so.

You dig your pit wider at the base with a narrow opening above ground. Then you need to add a diagonal air vent to feed your fire.

This is the first and still most accessible form humans ever used to make (nearly) smokeless fire pits. If you need a step-by-step tutorial, I recommend starting with this video.

There are a lot of good smokeless fire pits available. All of them will keep you warm and give you a low-smoke fire that burns well with less mess and risk.

I’ve tried plenty of them out over the years. Sometimes the differences between one product and the next are minimal, but the best smokeless fire pit you can get this year is truly unique and award-winning.

I recommend the TIKI Brand Stainless Steel Low Smoke Fire Pit from Amazon. The black, weatherproof, powder-coated outside looks great in any yard.

Not only does this twenty-five-inch fire pit has a patented internal airflow system that creates a better, safer fire with less ash and smoke, but you’ll appreciate the ash pan on the bottom when it’s time to clean up.

CNET rated this the best overall fire pit of 2021, and it won an Edison Award the same year because of its innovative design.

Best of all, you get a pack of wood, a cloth cover to keep it clean when it’s cooled down, a stand, and a quick start guide. 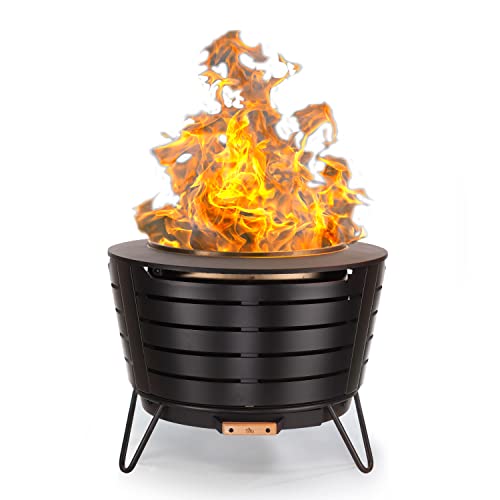 Sadly, the old saying about ‘no smoke without fire’ is also true in reverse. However, that doesn’t mean you have to have massive quantities of bad-for-you smoke to enjoy some roasted marshmallows on a col evening.

Here are some helpful tips to know if smokeless fire pits are really smokeless.

Although smokeless fire pits aren’t truly smokeless, they cut down the amount of smoke. Because of their design and shape, the wood burns more slowly and puts off far less pollution and particulate matter, which is excellent for the environment.

Better still, they produce plenty of heat and provide all the benefits of a regular fire pit. Choosing this style is great for limited spaces and beneficial for your lungs because you aren’t inhaling the byproduct of common open-air fire.

The earliest known fire pits date back hundreds of thousands of years to the middle Paleolithic period. Archaeological digs in the Klasies River in South Africa and Israel show evidence of...

Continue Reading
link to Do Fire Pits Make You Smell

A fire pit is a great way to make your backyard more enjoyable, but it can also emit an unpleasant smell. The odor of smoke from the fire pit can linger for days after the event. A fire pit will...