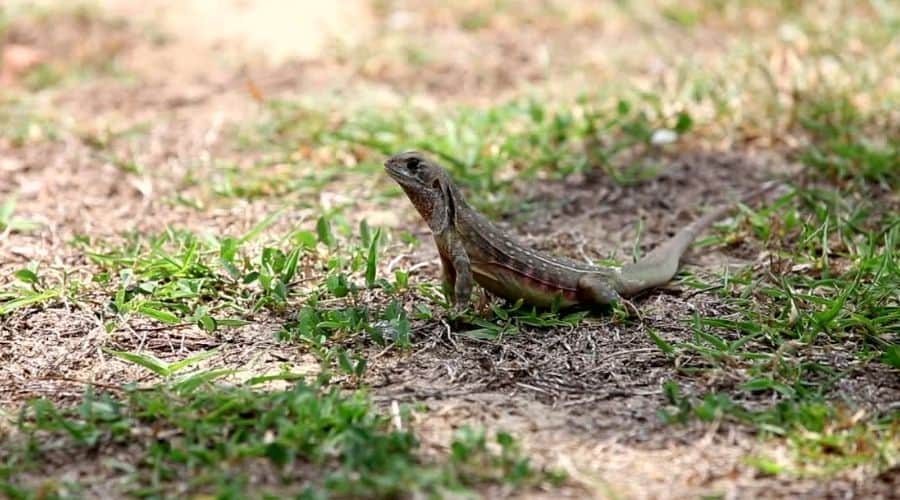 Only A few lizards on earth are venomous like snakes. Most species of lizards have sharp tricuspid teeth to bite with, but this is mostly for eating rather than attacking.

Backyard lizards are not dangerous to humans or pets and can be incredibly beneficial to have around. Not only do small lizards eat pests like insects, but some have a protein in their blood that can kill Lyme disease if a tick bites them. The chances of you or your pets being injured by a backyard lizard is almost zero.

House lizards or the common house gecko are not dangerous. These small lizards can live a surprising five years and eat anywhere from 2 to 20 insects every day or two.

They eat the most in their early life, during growth spurts, but can help keep your home pest insect population down, so they are actually beneficial.

Some people keep house lizards as pets. They are relatively low maintenance and a lot of fun to watch.

However, pet lizards are typically fed shop-raised insects so that you don’t get the added pest control.

If a house gecko bites you, it is unlikely to break the skin. If it does, wash the area with a good antibacterial soap and keep an eye on it as you would with any other small abrasion or cut.

Garden lizards aren’t harmful. In fact, a thriving lizard population is a sign of a healthy garden.

The little lizards are running around helping you out by eating many of the insects that might otherwise infest your yard. Garden lizards will even eat slugs that destroy plants.

Having garden lizards around is also helpful in a more surprising way. These tiny creatures are susceptible to environmental pollutants.

If you have lizards running around the yard, you have low pesticide levels. Moreover, there are likely little to no heavy metals polluting your soil because it would kill the lizards.

Garden lizards can bite, but they usually don’t. More importantly, they offer plenty of warning before they snap at you unless it’s accidental.

When a lizard is going to bite, it opens its mouth very wide and holds that pose. Some species also make a hissing noise.

Your garden lizards don’t want to bite you because you are far too large to be food. Mostly they prefer to be left alone.

If you are faced with a little lizard making threatening motions, you’ve terrified the poor thing. To avoid getting bitten, all you need to do is not chase it or reach for it.

What Happens If A Lizard Bites You

Typically if a lizard bites you, all that happens is that you feel a pinch.

House lizards and garden lizards are all small, non-venomous, and unlikely to do damage. However, some areas have larger and more dangerous lizards.

According to National Geographic, “The Gila monster is one of only a handful of venomous lizards in the world. Others include the similar-looking Mexican beaded lizards, as well as iguanas and monitor lizards. Its venom is a fairly mild neurotoxin. And though a Gila bite is extremely painful, none has resulted in a reported human death.”

Signs of a Venomous Bite

Signs of a venomous bite include but are not limited to the list below. If you suspect you have been bitten by one of the few species of venomous lizards, you should stay calm.

Make your way to a phone and call for an ambulance or go to the hospital right away if you are experiencing any of these symptoms.

An important note on pain. Everyone experiences pain in their own way, and what is serious for one person may feel important to another.

Feeling some discomfort after a bite is normal. However, if the pain is severe or accompanied by any of the symptoms listed above, you should seek medical treatment immediately.

It is always best to err on the side of caution where bites are concerned.

After all, a lizard’s most recent meal could have contained something more dangerous than the lizard itself. Lizards are pretty indiscriminate eaters.

What Kind Of Lizards Can You Find In Your Backyard

There are several types of lizards commonly found in backyards in North America.

Skinks are smoother than their cousins and are often seen basking on rocks.

Other common species include Geckos, Alligator lizards, Eastern and Western Fence lizards, Green Anoles, and the Side-Blotched lizards, to name a few.

Happily, you don’t need to worry about being in danger from any of these species.

However, people and pets should watch out for Gila Monsters and Mexican Bearded lizards in the southwest.

Are Garden Lizards Poisonous To Dogs

Garden lizards are not poisonous to dogs. The small yard and garden lizards you see around your house are not a problem for your dog.

They are a challenge and a source of entertainment. If your dog eats a lizard, it will digest the lizard just fine.

If your dog eats a garden lizard and begins to drool a lot, it is usually because the lizard tasted terrible.

Unless there are other symptoms, give your canine companion some water to rinse their mouth out with, and don’t worry about them.

Are Garden Lizards Poisonous To Cats

Garden lizards are not poisonous to cats. Outdoor and stray felines often catch and eat skinks, fence lizards, and geckos.

It may seem gross to a human, but it’s a snack that keeps you on your toes to your favorite feline.

The chances of bites, claws, or getting tail whipped are slim but never none, so be sure to check your outdoor cats regularly to ensure they haven’t tangled with their last meal in a way that requires wound cleaning.

Helpful Tips To Know About If Backyard Lizards Are Dangerous

You don’t need to worry about small backyard lizards in most cases. Even in the desert, the dangerous ones are more than a couple of inches long as adults and easily identifiable.

Here are more helpful tips to know about if backyard lizards are dangerous.

There is no reason to worry about backyard lizards being dangerous. Having lizards around is a sign that you need the pest control they provide because there are plenty of bugs.

More importantly, it should tell you that there aren’t many poisons or heavy metals in your outdoor space because lizards are very sensitive to those things.

A lizard bite from a house or yard lizard is seldom a cause for concern and is easily avoided by leaving them alone.

Unless you live in an area with Gila monsters and Mexican Bearded lizards, the worst thing you have to worry about is accidentally stepping on one or watching your pet eat it and being grossed out.

link to What Do Backyard Lizards Eat

Lizards live virtually everywhere on earth, so you probably have them in your backyard. Some lizards can change colors to blend into their natural surroundings, which helps them hide from predators...

Continue Reading
link to Can Lizards Be Killed By Cockroach Spray

If you spot lizards crawling on your wall however the only chemical spray you have is for cockroaches, you are probably wondering can lizards be killed by cockroach spray? After all, you probably...