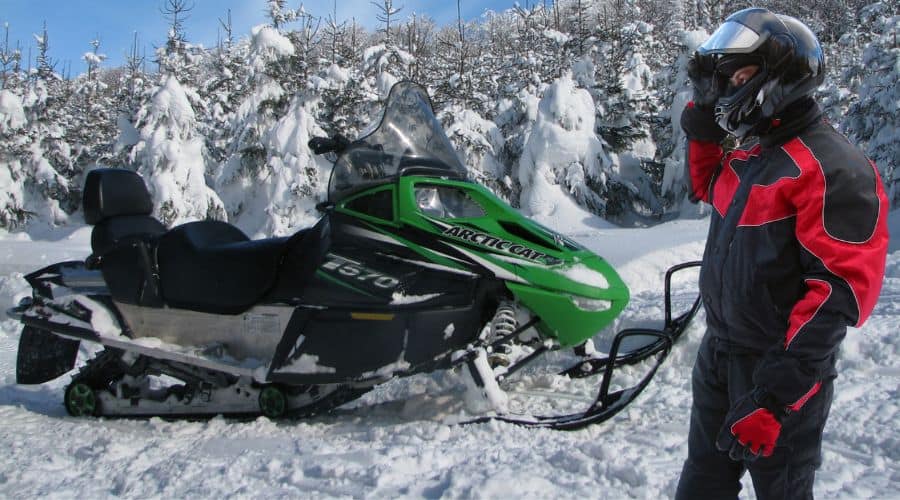 Arctic Cat was founded by a former owner of Polaris who decided to strike out on his own to make high-quality snowmobiles. Although this company doesn’t mass produce as many styles as some of its larger competitors, it still holds down a respectably sized corner of the market.

Are Arctic Cat snowmobiles good? I will teach you all about this great business and share the two best snowmobile models to buy.

Arctic Cat is considered one of the best brands of snowmobiles because they produce good, reliable, and well-liked sleds. Their snowmobiles are exceptionally popular because of their high-quality parts, durable engines, and an excellent array of features. Arctic Cats are also famed for being easy to repair.

How Good Are Arctic Cat Snowmobiles

Arctic Cat snowmobiles are excellent machines and make it to the top ten lists almost every year.

These sleds are similar in quality and share some style with Polaris because they were created by Edgar Heteen, who was a part-owner and employee there before opting to start a new business on his own.

The two brands were once called ‘Minnesota twins’ because they both have head offices and got their start in the famously snowy state.

The similarity doesn’t end there. Polaris and Artic Cat have both been owned by Textron at different points.

Polaris went first in 1968, and in 2017 they acquired Arctic Cat. Moreover, this company also shares DNA with another well-trusted brand, Yamaha.

Arctic Cat combines some of Polaris and Yamaha’s best qualities, but it also hires people who are passionate about making and innovating snowmobiles.

However, this company is wholly separate. If you are looking for a great, durable, easy-to-repair snowmobile, Artic Cat should be in your top 3 choices every time.

In addition to its many accolades over the years, the Snowmobile Hall of Fame awarded one particular Arctic Cat employee a big honor this year.

According to Arctic Insider, “At the recent Snowmobile Hall of Fame (SHOF) induction, Tom Rowland, owner of Thomas Sno Sports, was presented the Legacy Award for his contributions to the snowmobile industry by Craig Marchbank from SHOF.”

Arctic Cat snowmobiles are reliable. Although snowmobiles always take a beating and need more repair and maintenance than some other power sport vehicles, a good one will last years before it needs significant rebuilds or replacements. Arctic Cats are among those ‘good ones.’

Yamaha 4-stroke engines are widely accepted as the most trusted options on the market for snowmobiling.

In fact, Yamaha snowmobiles are typically hailed as the most reliable overall because of their outstanding and durable engines.

You get the same 4-stroke engine when riding a modern Arctic Cat, but the company utilizes an innovative and equally trustworthy design of its’ own on the smaller 2-stroke models.

No one wants a sled that could leave them stranded in the cold. If you, like most snowmobilers, ride around 1000 miles per year on your sled, then you can count on your Arctic Cat for at least a decade.

Some well-cared-for machines last up to 20 years before they need new or rebuilt engines.

Choosing a brand like Arctic Cat that draws from its competitors’ success while innovating for itself is a savvy way to get more for your money.

Which Is Better, Arctic Cat or Polaris

There are many important considerations when deciding which is better, Arctic Cat or Polaris.

For example, you can compare the relative working life of each brand’s sleds.

However, quality comes in many forms, so I’ll walk you through some of the most important ways these two brands stack up side-by-side.

It’s hard to judge a winner here. Arctic Cat primarily specializes in well-loved snowmobiles, and the company is synonymous with winter landscapes and freshly fallen snow.

Meanwhile, Polaris puts out quality and quantity in a more diverse market.

I have to give it to Polaris by a very slim margin. The higher prices are balanced by a more extended average working life, longer history, and more available options.

That said, Arctic Cat owners are generally happy and brand loyal because specializing in one style of recreational vehicle for much longer was risky but paid off in innovation and reliability.

Most Arctic Cat snowmobiles are outstanding and well worth the money at any age. However, they can’t all be ‘the best.’

After years of riding and even more research, I can confidently say I have narrowed it down to the two best Arctic Cat snowmobiles, and both will surprise you.

Plus, the controls for your hand and thumb warmers, reverse, and high beams are all on the dash instead of the handlebars.

You can get your hands on this latest and greatest Arctic Cat snowmobile right here.

The Arctic Cat ZR 600 EFI (1998 to 2003) was, and still is, an awesome sled. The stock model of this particular machine was one of the fastest ever built at the time.

However, speed wasn’t the only reason to love these fast sleds. Unlike previous models, it features an updated fuel batteryless EFI fuel delivery system, which helped give this sled its name.

Equally important, this particular model is known for its ability to take tight corners and come in standard and cross-country varieties.

The ZR 600 EFI was so well-liked that new models were still being made well into the ’00s.

As one reviewer on Arctic Chat says, “Those are great sleds, fun to ride, and they can generally take a beating.EFI is definitely the way to go if you have the choice; less adjusting (you don’t have to change jets for different temperature conditions or elevations) and less likely to need to be taken off and cleaned (like carbs do nearly every year). The batteryless is also a plus because you don’t have the battery to maintain/replace and deal with.”

You can pick one up secondhand by clicking right here.

Arctic Cat snowmobiles are great sleds. Not only are they reliable and durable, but they can last for decades with a little TLC.

If you are thinking about buying an Arctic Cat snowmobile, I highly recommend it. This excellent company has been committed to making high-quality, reliable snowmobiles for the last 60 years.

With just one US factory, Arctic Cat is helping bring jobs to its local community.

Best of all, Arctic Cat is an innovator in its field that strives to build better sleds by self-producing 2-stroke engines and more.

link to 10 Best Snowmobiles Of All Time

The Best snowmobiles in the industry's history were models that set precedents for the years to come. Engineers continually advanced the technologies from the early foundations laid. Here are the...

The best snowmobiles under $5,000 are found in the most reliable brands. They include Yamaha, Ski-Doo, Arctic Cat, and Polaris. Beginners and intermediate riders will find suitable choices under...